This quarter we welcome Michael Lockman as APLD Washington’s next featured designer. We hope you enjoy Michael’s story and this focus on his projects.

When did you start designing gardens? Tell us about your path from then to now.

Instead of following a career in philosophy or math after I received a degree from Purdue University, to steal a line from Joseph Campbell – I followed my bliss. It started with a need to take care of myself. For a boy accustomed to mommy making his meals, it meant learning to cook!

This led to vegetarianism and a stint at the Food Coop in Lafayette, Indiana, where I discovered vegan macrobiotic food and whole-grain baking. The Coop bought produce directly from local farmers and one day a farmer brought in bunches of white globes with green tops. I was blown away, a new vegetable! The farmer laughed and said, “Dems onions, son!” I had never seen a yellow onion without the dry skin and in that moment, I realized I did not know how my food was grown.

The irony of being surrounded by corn (for syrup) and soybeans (for livestock feed), yet having no real connection to food, was not lost on me. It was 1991 and a Google search wasn’t an option. I instead did what we used to do: I told everyone who came into the deli/bakery I was going to be a farmer! One day, a customer handed me, from the back pocket of his dungarees, a list of farms on the West Coast that offered summer internships. Some of them even paid money. A few dozen phone calls and six months later, I arrived at Mother Flight Farm in Mount Vernon, WA. I spent the next six months learning how to grow food. 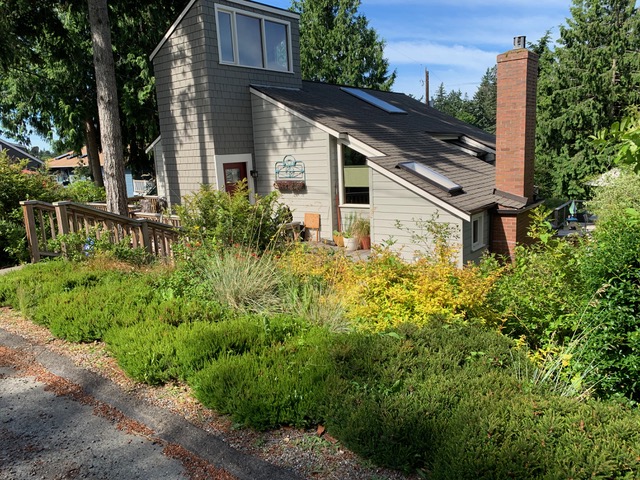 Once I realized the farmer was broke, I did what any sensible 22-year-old would do at the time, I moved to Seattle and entered the grunge rock scene (Nirvana, Soundgarden, The Melvins, Screaming Trees, etc.). I attended as many live shows as I possibly could and worked at ‘Ye Olde’ Rainbow Grocery on Capitol Hill. That’s where I saw the flier for a Permaculture Design Course in Bellingham, taught by Simon Henderson. Simon was the produce manager at the Food Coop in Mount Vernon. I was familiar with his rants about sustainability and permaculture. After the first of five weekends, I had an “Aha” moment and was inspired to start a business to help people grow food in their backyards.

I sought like-minded souls in the permaculture movement and in 1993 started EcoScape Gardens with two business partners. We did some pioneering work with broken concrete (urbanite) and planted a lot of fruit trees. Due to the reality of too many cooks in the kitchen (or maybe it was too many gardeners in the paw-paw patch), EcoScape disbanded after one quick year in business. At that point, I was hooked on plants and decided to pursue a career and a formal design education.

Instead of enrolling in a landscape architecture program, I enrolled at Antioch University – Seattle to pursue a masters in Whole Systems Design. This independent program offered me a theoretical context to explore permaculture, landscape design, and community engagement. I pursued internships with designers on Orcas Island, in Tonasket, WA, and in Colorado and Arizona and used my time at Antioch to develop my own design business. While sustainability and permaculture were a big part of my design interest, I chose phrasing like “edible landscaping” and “backyard wildlife habitat” to appeal to a larger market and avoid having to explain permaculture. 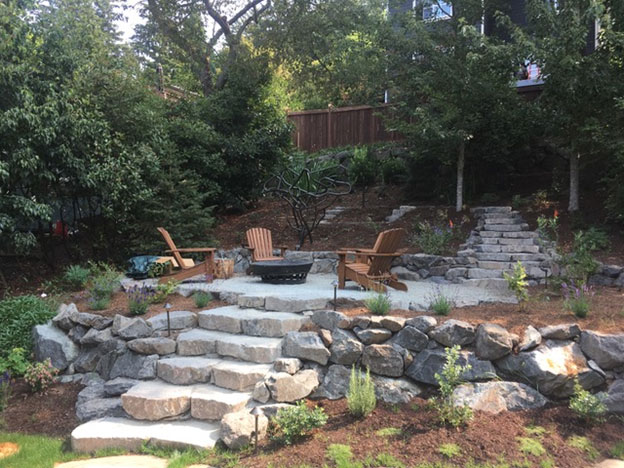 West Seattle gravel firepit patio, ¼-minus compacted firm. Second set of stone stairs lead to a hammock grotto with posts for 3 hammocks. (Notice the metal sculpture just above the gravel patio, it provides one end of support for the hammocks.) 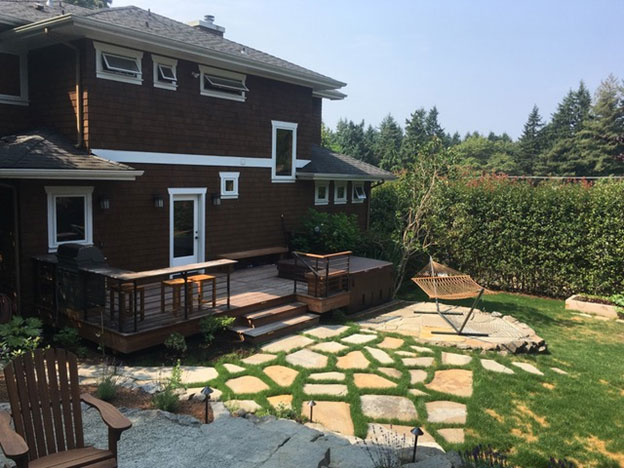 The same project, this view from the gravel patio looking down at the Ipe deck – with built-in gas BBQ and counter top, and sunken hot top – flagstone set in lawn and a flagstone patio.

Place-centered, client-based, food-forward, vernacularly-aware, whole-systems landscape design. Unfortunately, that does not fit on my business card! “Beautiful, Functional Garden Spaces” does, and that pretty much sums up my style.

Who inspires you and your designs?

Is your focus design? Or do you also manage installation, build, and maintain gardens?

I am in transition, moving away from design/build and toward design/project manage. My contractor’s license is still valid, but I sub out 90-95% of the installation work, usually doing the planting myself.

What experiences as a designer have you found to be most challenging?

My current challenge is staying engaged with my work. After 28 years, it’s easy to slip into complacency and become jaded. The question for me is “how do I keep it fresh?” The answer (for me) is that I have to be mindful and strive EVERYDAY to keep it fresh and stay focused. That has included working with a business coach to rediscover why I got into Landscape Design in the first place, and to remember what attracted me to the field. Having someone else’s perspective was extremely informative! In addition, I have been taking classes that interest me on a personal level, NOT necessarily on a professional level.

Which experiences have you found to be most rewarding?

Collaborating with a client and a team of designers and installers to create a beautiful, functional landscape that the client ACTUALLY uses! I have also been teaching in the Edmonds Community College Horticulture program for the past three years and now at the South Seattle College Hort. Program. I find it to be the most rewarding part of my work, if not a bit underfunded!

Describe a typical design project and your process.

While each client, site and design is unique, my process is the same: to invite the client to explore their landscape and their relationship to it. I invest time on the initial client interview (contract has been signed and retainer is in hand) and get to know clients (and their family). I explore their patterns of living and their outdoor lifestyle. Budget is always at the front of my mind and discussed at every juncture. Preliminary drawings are shared and followed up with field trips to look at material options. The “final” design emerges and off we go, bid in hand. (The word “final” is in quotes because I believe the design is still in process until it is installed.) As I transition away from design/build, I am reminded of the need to bring the contractor to the table early in the process! I took it for granted when I was leading the install.

What would your ideal project and client be?

Someone who wants a beautiful, functional garden space, is willing to be fully engaged in the design process, and lives in West Seattle. As soon as the West Seattle Bridge closed, I stopped taking clients east of the Duwamish River!

Do you collaborate with other designers?

Every chance I get!

How has permitting requirements (stormwater, ECA, etc.) or site limitations affected your design process and creativity?

I believe that creativity is limited only by the imagination and attitude of the designer. And the budget of the client! ECA and permitting are merely site conditions to be dealt with, essentially no different than sun aspect and soil health. 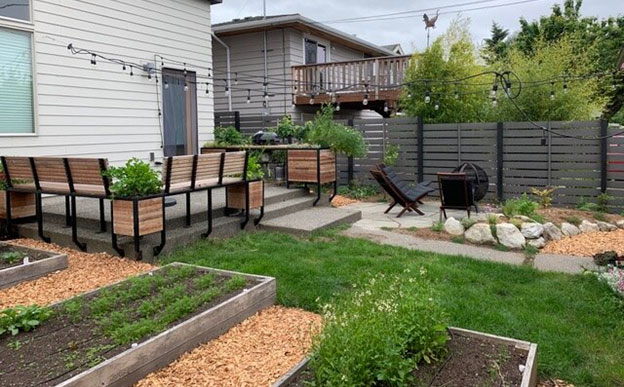 Tell us about one of your favorite or most memorable projects.

While this project may never qualify as my favorite, it certainly is memorable. Whenever you collaborate with two designers, five contractors and a client with a propensity to dream, you get memorable! But I lost sleep over this one. You would think after 28 years that wouldn’t happen. The challenge was how to transform an unfunctional patio. It was too small for a table and with a step down around the perimeter, there was no place to gather and feel like you weren’t going to fall off. Instead of removing and replacing, or constructing a deck over the top, we decided to build in benches, planters and a customized Weber grill to create a much more inviting space. The frame was custom metal work and it was clad in Ipe. Check out the ‘charcoal drawer’! 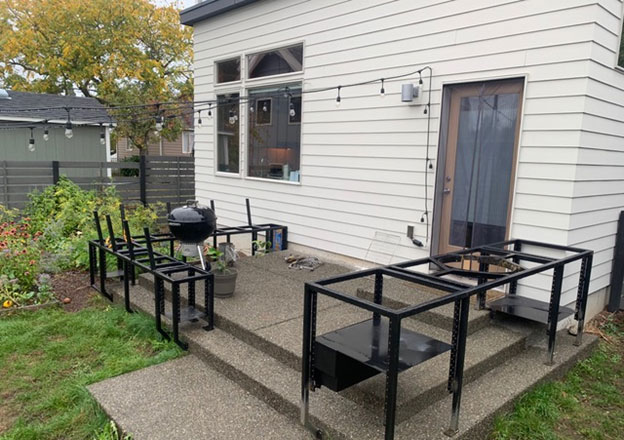 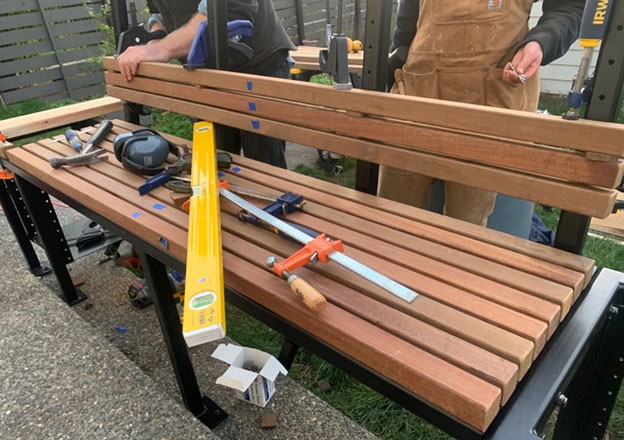 Attaching Ipe slats to the benches on custom metal frames. 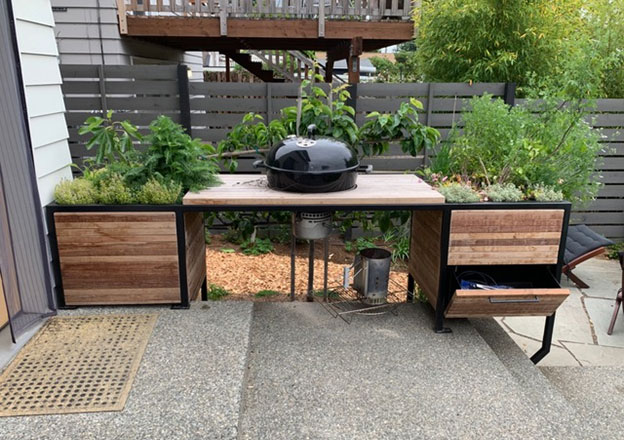 Finished construction with a built-in Weber grill and a charcoal drawer!