Beauty, Tranquility, and Calm: How to Incorporate the Essence of Japanese Gardens into Seattle-area Landscapes

Landscape design clients often express an interest in creating a landscape that resembles a Japanese garden. Although there are several different styles of garden in Japan, often what the client is after is a stroll garden, such as the Seattle Japanese Garden in the Washington Park Arboretum, where paths lead the visitor through the garden. Because the art of Japanese garden design takes years if not lifetimes to master, any discussion of it is inherently superficial, but your success in incorporating some of the design aesthetics will depend on the extent to which you can mimic the elements of a Japanese garden that create feelings of calm and tranquility. This article offers insights into a few of the features of Japanese gardens that promote the emotional responses you wish to generate. 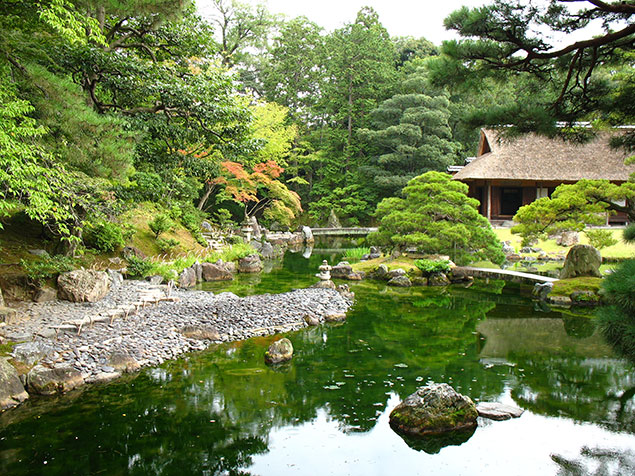 Balance, Control, and Layering
It is obvious when studying the photo from Katsura Villa in Kyoto that the garden is carefully controlled. The placement of every rock and plant was done with intention. Although the elements are laden with symbolism, for example, the packed flat stones represent a shoreline and the lantern is a lighthouse at its tip, individual features can be analyzed to determine their roles in creating the feelings you wish to convey in your own garden.

We’ve all visited gardens (and some of us have them) that comprise tangled masses of plants in which there appears to have been no vision or forethought. At Katsura Villa, the opposite is the case, and it is ironic that a garden so controlled should appear so natural and have such a calming effect on the visitor. To the left and in the distance is a carefully layered blend of evergreen and deciduous plants that combine to create a lovely textural wall (or mountain forest) against which to showcase the interior landscape.

The meticulously pruned pine in the foreground on the right is a focal point in the garden and has enough space to be appreciated in its entirety. Older pine needles have been removed by hand and branches pruned so that each remaining branch of the pine can be studied individually. The pine, which stands alone above the shore against a contrasting forest backdrop and nearby tea pavilion, is a riveting sight in the landscape. 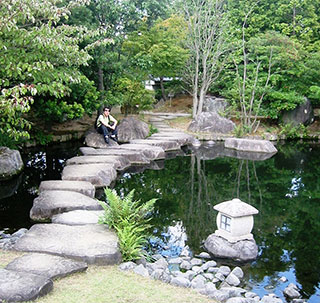 Himeji Koko-en, Okayama, Japan
Image courtesy of Janine Anderson
Water
Given that Japan is a nation of small islands surrounded by seas, it is not surprising that water should play an important role in its gardens. The garden at Katsura Villa is reflected in the pond, making the landscape even more magical and giving it greater depth and beauty. The fact that Katsura Villa resembles a painting is no accident—gardens in Japan often have been inspired by actual paintings. Attempting to recreate a landscape from a favored painting would be a worthwhile exercise in garden design. Just think of the Pacific Northwest scenes one could try to recreate, such as a rocky headland, a coastal marsh, or a stream dotted with moss-covered rocks running through a lush forest.

Stone
Stone setting is an ancient and important part of the garden tradition in Japan that continues to the present time. In garden design, stones can be ornamental or functional, but if functional they must also be aesthetically pleasing. In the photo from Koko-en garden in Okayama, Japan, large slabs of carefully placed stones form a bridge over water, forcing the visitor to slowly take in different views of the garden with every step. Once across, the large boulders are impressive in scale but also clearly welcoming and comfortable enough to provide a spot to sit and rest and further opportunity to contemplate the garden.

In the United States, boulders are often randomly distributed throughout a landscape or used as barricades with no thought to artful placement. In most instances, the rocks could be arranged in an aesthetically pleasing grouping while still addressing security needs. Given the physical difficulty of placing heavy rocks, it is usually necessary to employ a professional designer or installer for help in selection and placement.

Paths: It’s the Journey, Not the Destination
Paths in Japanese gardens reflect not only the designer’s intent as to how the visitor should travel through the garden, but as with other components, they are exquisitely beautiful features all on their own. The mortared stone walkway at an airport hotel in Narita, Japan, serves as a means of traveling through the plantings that flank it, yet before you step onto the gently curved walkway you must pause on a large stone slab, and then step over a band of pebbles.

It would be foolhardy to rush across the zig-zag bridge at Koraku-en Garden in Okayama, Japan. Instead, one has to step carefully and pause at every turn in the path to take in the intended view.

Fifty Shades of Green: A Few Words About Plants
The iconic plants in Japanese gardens are native to Japan. Fortunately, most of them also perform well in the maritime climate of the Pacific Northwest. Varieties of Japanese maple (Acer palmatum), flowering cherry and plum trees, Hinoki cypress (Chamaecyparis obtusa), boxwood, and evergreen and deciduous rhododendrons feature prominently, as do several different kinds of pine and bamboo.

Usually the colors of a Japanese garden are muted, which contributes to their soothing effect. Indeed, brightly colored flowers on azaleas are often removed before blooming to maintain the subtlety of the landscape.

Reverence
A major difference between gardens in Japan and most in the United States is the care and reverence with which they are tended—they are immaculate. Absent are the noisy, polluting gas-powered machines so prevalent in this country. At Kenroku-en Garden in Kanazawa, Japan, a uniformed gardener carefully grooms a carpet of moss. Ancient trees are valued and protected. The limbs of a red pine have numerous supports, and the bamboo tent lying below will soon be erected to protect the tree from upcoming winter snow loads.

In addition to the pleasure such a pristine garden provides the visitor, the intimacy with the landscape inherent in tending it has a calming and meditative effect on the gardener as well.

Conclusions
Many of us lead busy lives, and in nature we find beauty and calm. A Japanese garden, in contrast to the formal geometry of many Western-style gardens, carefully mimics nature. The intent of this article is to offer a glimpse of some of the iconic features common to Japanese gardens that evoke feelings of tranquility and calm and that can be recreated in your own landscape. In preparing this article, I borrowed from the knowledgeable writings of landscape designer Leanne Goulding and Japan garden tour guide Marilyn Tsuchiya.