Ornamental grasses are finely textured plants that lend a casual and relaxed feeling to your landscape. They move with breezes and capture sunlight, changing with the seasons and time of day. They also provide food, nest material, and cover for birds. 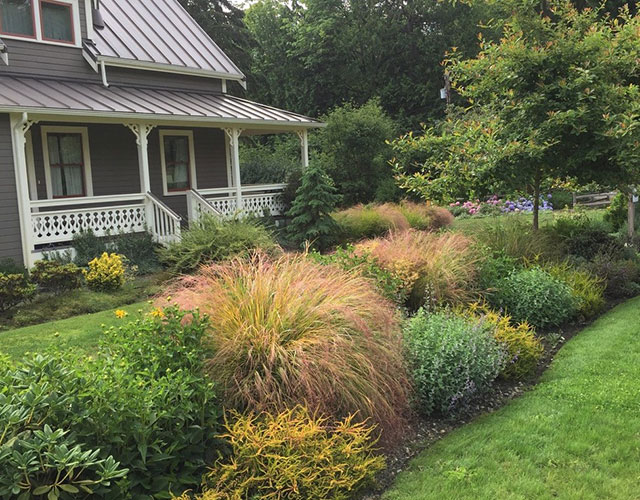 Pheasant’s Tail Grass (Anemanthele lessoniana) stands out in this mixed border. More about this New Zealand native is under “Caveats and Conclusions.” Design and photo courtesy of Octavia Chambliss

Primary considerations when selecting ornamental grasses are site conditions—sun or shade, wet or dry, soil type (e.g., sand or clay), space, and companion plants. Although they are inherently informal, ornamental grasses are also effective in more traditional landscapes, for example, when planted along a formal entryway.

There are many exquisitely beautiful grasses and grass-like plants, but landscape designers favor those they have found to perform well in the landscape in addition to being stunning. This article provides a sample of some of the best selections.

Maiden Grasses (Miscanthus sinensis)
Although the variety of maiden grasses available at local garden centers can be overwhelming, area landscape designers are almost unanimously enthusiastic about a mere handful of the selections. These deciduous grasses offer three-season interest, with foliage emerging in spring, followed by flowers, seed heads, and fall colors that shimmer in the autumn light.

Maiden grasses are not drought tolerant and will look their best with some summer irrigation, a bright location, and minimal or no fertilization. Cut them to the ground in winter before the new foliage emerges.

The white-variegated foliage of Miscanthus sinensis ‘Morning Light’ looks silvery blue in a border and has a fine, airy texture. It lightens dark corners and is effective by itself or en masse. The fine-foliaged ‘Adagio’ forms a petite mound spiked with feathery seed head plumes in August. The pinkish flowers of ‘Yaku Jima’ emerge in September, turning beige later in the fall as the seeds mature, while the foliage takes on orange tones. ‘Gold Bar’ is a narrow, vertical selection with clean, bold variegated foliage that maintains its upright form. 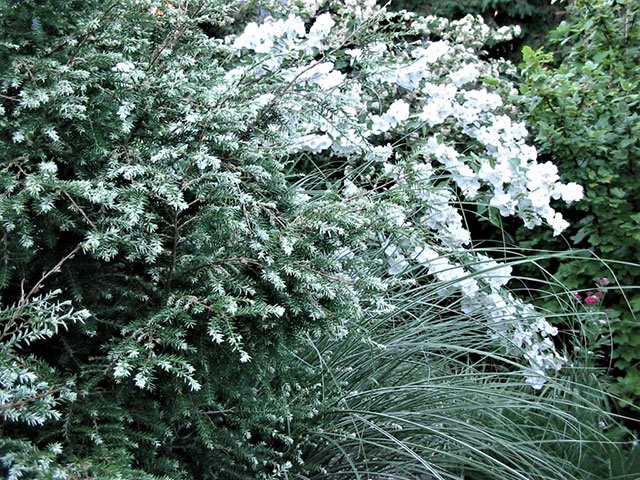 Landscape designer Susan Picquelle has paired silvery ‘Morning Light’ maiden grass with other whites. The hemlock to the left is Tsuga canadensis ‘Gentsch White’; beside it is the mock orange Philadelphus virginalis ‘Innocence’. Photo courtesy of Susan Picquelle

Fountain Grasses (Pennisetum)
Fountain grasses are aptly named. From late June to October, a fountain of flowers rise and cascade above the basal clump of foliage.

Fountain grasses require full sun and can handle a hot spot. The soil should be well drained (avoid wet areas), and only occasional watering is needed during summer dry spells. As with maiden grass, fountain grass should be cut to the ground in fall or winter after the seed heads are no longer attractive.

Area designers are partial to varieties of the species Pennisetum alopecuroides. Designer Laura Kleppe considers two diminutive selections, ‘Little Bunny’ and ‘Hameln’, her standbys. Also favored is ‘Burgundy Bunny’, which stays under two feet tall and has red-tinged foliage that emerges in spring.

Pennisetum orientale ’Karley Rose’ is a popular selection whose rose-colored flower spikes rise above the foliage in late summer. Although Karley Rose is a Great Plant Pick for our region, some designers have found that it self-sows, necessitating hours of weeding to eradicate the seedlings that pop up everywhere. 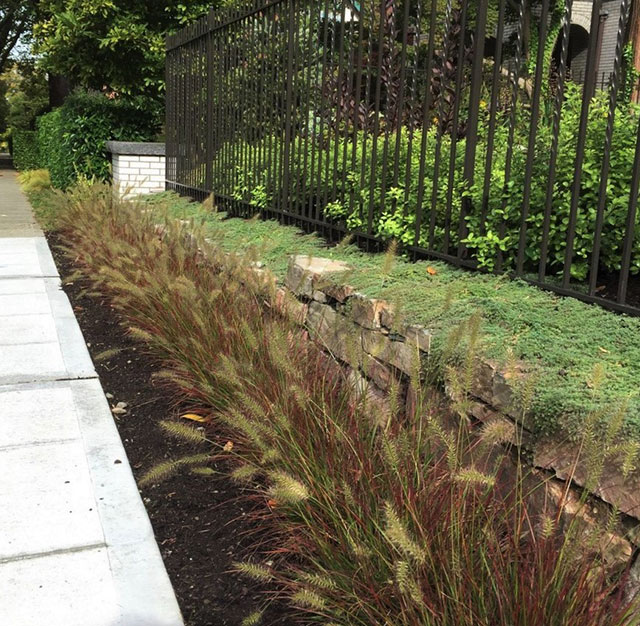 Japanese Forest Grasses (Hakonechloa macra)
Few grasses inspire more awe than Hakonechloa, native to the mountainous Hakone region of Japan. Designer Susan Picquelle considers Hakone grass the most glorious grass, especially when viewed from above. Although Hakone grass stays well under two feet tall, some varieties spread to five feet or more. It is dramatic when lining a walkway, but also eye popping in combination with other plants.

Hakone grass does well in shade and can handle some sun, but hot afternoon sun should be avoided. Regular water during dry periods will keep it looking lush and full. As with other deciduous grasses, Japanese Forest Grass can be cut to the ground in winter before the new foliage emerges.

Many designers favor the variety ‘Aureola’. With leaves striped green and gold, it appears as a true yellow in the landscape, and designer Susan Picquelle believes it coordinates well with other plants. Others also use the chartreuse variety ‘All Gold’, as well as the more diminutive selection, ‘Beni Kaze’. At three feet wide, the green ‘Beni Kaze’ takes on tones of deep red, burnt orange, and gold as summer merges into fall. 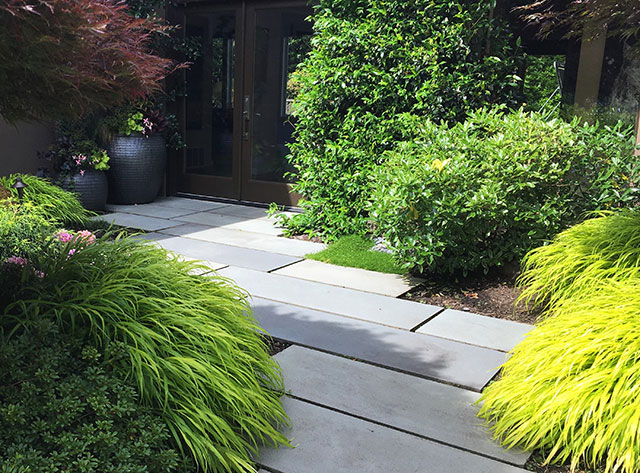 Hakonechloa macra ‘All Gold’ lights up the walkway and softens its edge. Design and photo courtesy of Robin Parsons

Sedges (Carex)
Sedges are lower-growing evergreen or deciduous grass-like plants that are attractive in drifts or edging a walkway. They tend to look best with occasional water. Sun and shade requirements vary by species.

Many designers use the fine-textured evergreen Carex testacea, which has dense, arching tufts of coppery orange foliage. Bowles’ Golden Sedge (Carex elata ‘Aurea’) is another favorite. Although this deciduous, clump-forming selection thrives in sun or light shade, its chartreuse foliage really brightens up areas with low light.

Several varieties of the species Carex oshimensis are popular with designers. Designer Lisa Bauer favors ‘Everillo’ because the winter burn that afflicts other sedges is absent. Its lime green leaves are stiff but flexible and look great in mass plantings. Other varieties of this species that are specified by designers include ‘Evergold’ with dark green and butter yellow variegated foliage and ‘Everest’, whose deep green blades have snowy white margins. 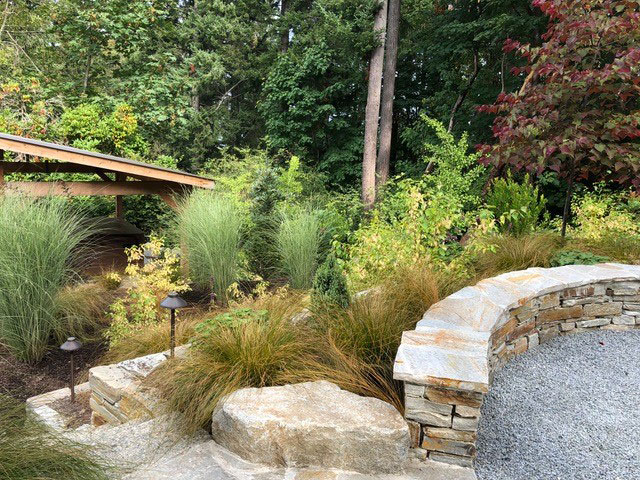 Small Wonders
Edging a garden bed with small grasses gives a finishing touch to your composition. Alternatively, massing smaller selections beneath a specimen tree showcases the tree without detracting from it.

The truly black Black Mondo Grass (Ophiopogon planiscapus ‘Nigrescens’) is eye catching in any landscape. Another, and quite different, mondo grass, Ophiopogon ‘Pam Harper’, is favored by Vancouver, WA, designer Vanessa Nagel, who likes to mingle this green and white variegated selection with groundcovers and short perennials to create a ground-covering matrix beneath shrubs.

Several fine-foliaged fescues are good candidates for drier areas. Among these are Festuca roemeri, an Oregon native, and West Coast native Festuca rubra ‘Patrick’s Point’, an exceptionally blue variety that tops out at 9 inches tall. 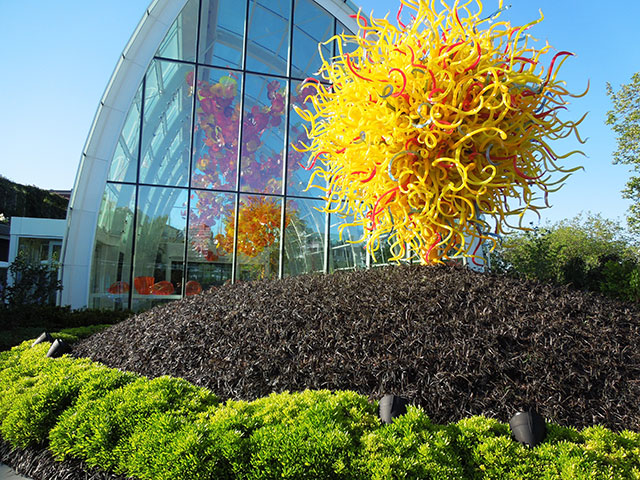 At the Chihuly Gardens in Seattle, the black mondo grass in this composition sets off a Chihuly sculpture. Photo courtesy of Janine Anderson

Karl Foerster Feather Reed Grass (Calamagrostis x acutiflora ‘Karl Foerster’) adds a strong vertical element to your landscape. Although the foliage reaches only two feet, its feathery flower stalks, which emerge in June, grow to 6 feet tall. It enjoys a sunny location and needs summer water only until established. As with other deciduous grasses, ‘Karl Foerster’ should be cut to the ground in late winter.

One of the many non-grass grasses, Astelia nivicola ‘Red Gem’ is a well-behaved stunner in the landscape. This evergreen lily relative has arching, red tinged and silver sword-shaped foliage that reaches about 2 by 2 feet. Avoid hot spots and full sun and provide rich, well-drained soil. 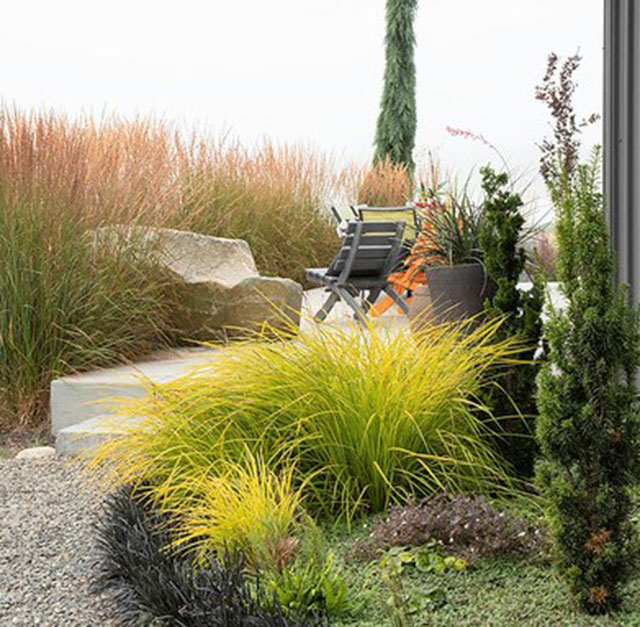 Caveats and Conclusions
Gardening is a process of trial and error. Most landscape designers love plants and like to experiment with unfamiliar plants and try new compositions. They develop a mental database of which plants work, as well as those they want to steer clear of.

Designers avoid grasses they have found to self-sow. Few things are more frustrating than a glorious garden being invaded by scores of unwanted seedlings. Grasses you might see in your local garden center that have a reputation for self-sowing include Carex comans ‘Frosted Curls’ and Mexican Feather Reed Grass (Stipa tenuissima).

Feelings about some grasses are mixed. One designer raves about Pheasant’s Tail Grass (Anemanthele lessoniana) while another has found it seeds everywhere and will not use it. For the same reason, the jury is conflicted about other grasses as well, including Carex flacca ‘Blue Zinger’, Calamagrostis brachytricha, Luzula sylvatica ‘Marginata’, Molinia caerulea ssp. arundinacea ‘Skyracer’, and Stipa gigantea. Although it doesn’t self-sow, the rhizomes of Carex morrowii ‘Ice Dance’ can expand it beyond its intended territory, yet it might be perfect in a woodland garden that stays a little on the dry side.