When a landscape designer recommends a shrub to a client, often the first response is, "How big does it get?" Clients are often anxious about plants that get to be too big, and often that anxiety is justified, as their garden area is limited.

This article concerns shrubs suitable for Seattle gardens. Wikipedia distinguishes shrubs from trees "by their multiple stems and shorter height, less than 6–10 m [approximately 20–33 feet] tall." This is a reasonable description, but many of us might consider a plant 20 feet tall or more to be a tree, or at least to serve as a tree in our landscape, regardless of whether it has multiple stems or not.

Large tomes have been written about shrubs, and we can't possibly cover every type of shrub in one article, even by narrowing it down to those suitable for Seattle! For this article, we'll reduce the scope by recommending eleven versatile shrubs, six evergreen and five deciduous, that stay under 5 feet tall. All of these shrubs are wonderful when planted in drifts, provide good contrast to taller plants, are effective for edging paths and driveways, and work well in combination with a variety of other plants. Some of the recommended shrubs are well known and some are less familiar, and we suspect a few of them might be knockouts in your backyard.

Evergreen Shrubs for Your Seattle Garden 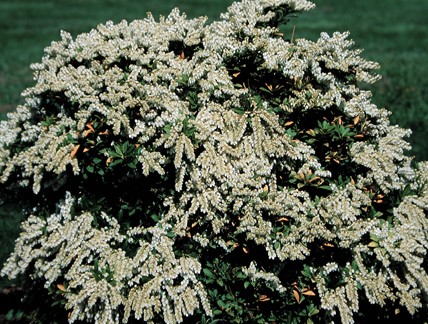 Chains of creamy white flowers on Pieris japonica 'Cavatine'. Photo © Richard W. Hartlage, Great Plant Picks
Many varieties of Pieris japonica grow to 10 feet or taller, but the diminutive Pieris japonica 'Cavatine' will remain compact, topping out at about 3 feet. Its narrow, dark green leaves are attractive year-round; emerging leaves in spring are bright red before turning green. In March, this lily-of the-valley shrub is covered in chains of creamy white bell-shaped flowers. Best sited in light to open shade, it combines well with other plants and is also effective in a drift. In the heather family (Ericaceae), Cavatine prefers rich, well-drained, slightly acidic soil.

Most rhododendrons in area nurseries are hybrids—crosses between two or more species or varieties. You would not find them growing in the wild while trekking in China, which is home to many native species. One species of rhododendron you might want to seek out, however, is Rhododendron pachysanthum. Chimacum Woods, a rhododendron nursery on the Olympic Peninsula, calls R. pachysanthum "the best rhododendron in the world"! Cloud Mountain Farm Center in Whatcom County refers to it as "one of the most beautiful foliage rhododendrons. The emerging foliage is covered by cinnamon indumentum [a felt-like coating that makes the foliage irresistibly "pettable"], which gradually lightens to a silvery tan. Light pink to almost white flowers."

Native to Taiwan, R. pachysanthum tops out at 4 by 4 feet and performs well in part to full part sun. Photo courtesy of Robert Zimmerman, Chimacum Woods

The handsome bluish green foliage and abundant light purple blooms of the hybrid rhododendron 'Ramapo' make it another fine choice for the smaller garden. Beautiful in groups of three of more, this April-flowering variety reaches 2 feet tall by 3 feet wide and is more sun tolerant than most other rhododendrons. 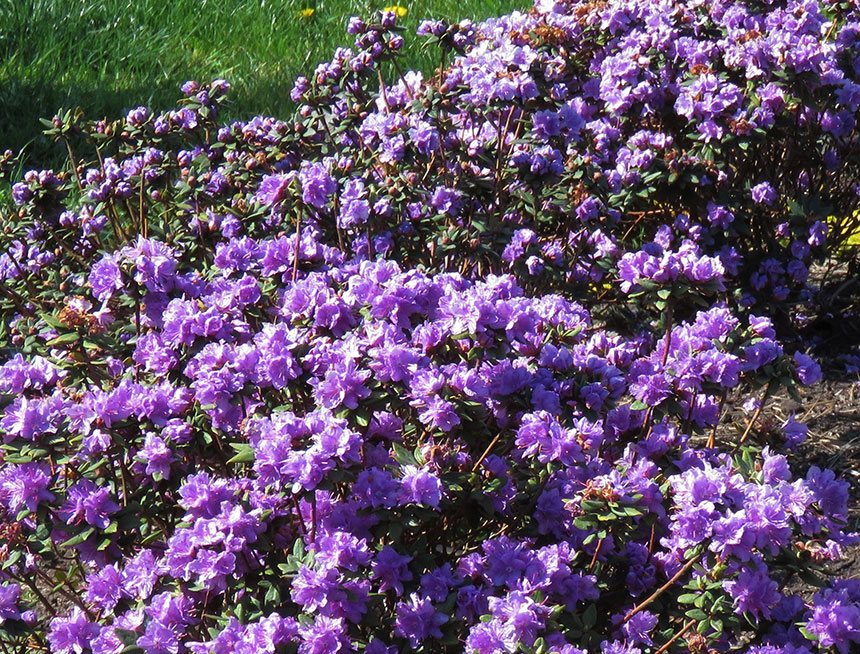 Among the many attributes a plant can possess is fragrance. The scent of daphne wafting through a garden on a warm spring day is intoxicating. The eight daphnes recommended on the Great Plant Picks website flower from late winter through summer. One of these, the evergreen Daphne tangutica, bears fragrant, pale pink flowers in spring that fade to ivory white. A mounding shrub reaching 4 by 4 feet at full maturity, D. tangutica prefers full sun to light shade and regular irrigation. 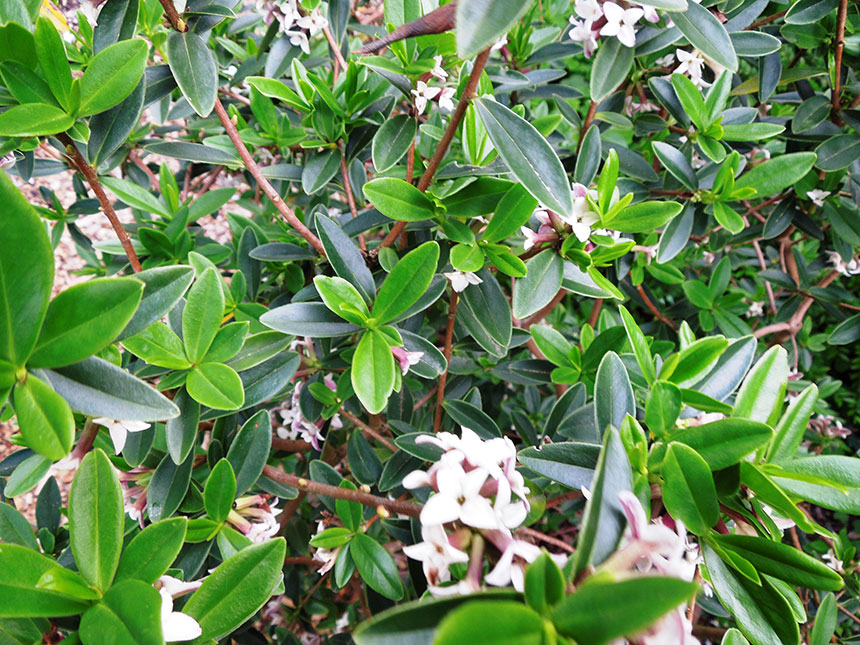 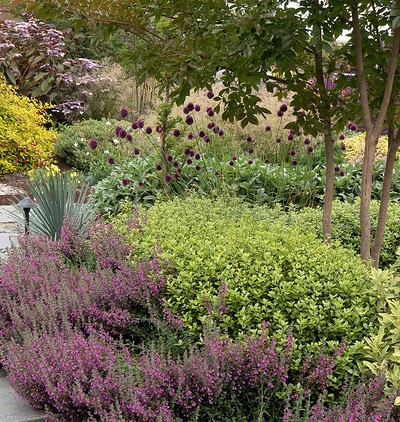 Bright green Pittosporum tenuifolium 'Golfball' beside magenta flowers of Teucrium chamaedrys (wall germander). Photo © Doreen Wynja
Pittosporum tenuifolium is sometimes referred to as black-stem pittosporum because the new stems on this New Zealand native are nearly black. Although the species can be tree sized at 30 feet tall, the variety 'Golfball' tops out at about 4 feet with an equal spread and makes a compact ball, hence the name golfball. Its attributes are many. It is fast growing, tolerant of seaside conditions, requires little pruning but can take pruning or shearing, has bright green foliage with a glossy sheen, and is wonderful in a drift, as a hedge, or as a geometric accent. Both its flowers and fruits are insignificant.

Many gardeners are familiar with, and have had mixed success with, hebes, a genus of about 90 species, most of which are native to New Zealand. Among the most exquisite as well as reliable of these is Hebe topiaria, so named because it looks like it has been sheared into a ball, whether it has been or not. With a maximum size of about 5 by 5 feet, H. topiaria can be kept somewhat smaller by giving it a light trim immediately after its white flowers appear in early summer.

With its mound-like form and grayish green evergreen foliage, H. topiaria pairs well with many other plants, offering contrasts in form, color, and texture. It also works sculpturally when planted in groups. It is best sited in full sun with occasional water during dry periods. 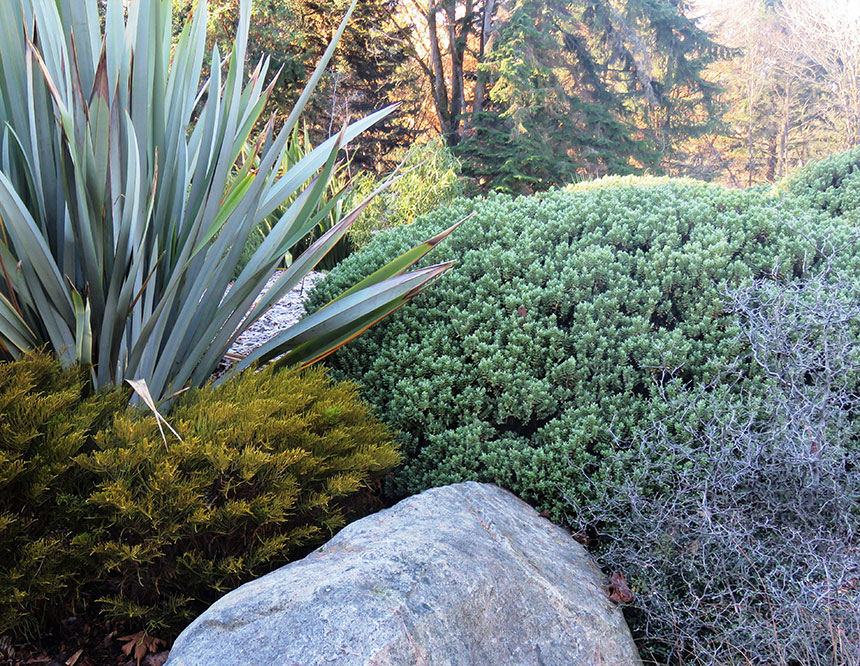 Deciduous Shrubs for Your Seattle Garden

Spiraea japonica 'Magic Carpet' is one of the most delightful shrubs for the spring garden. Its early spring foliage brightens the landscape with tones of orange and yellow, followed by chartreuse leaves with hints of orange, then russet red in the fall. It bears flat-topped pink flowers in early summer, after which a buzz cut can refresh the foliage and keep the plant tidy. 'Magic Carpet' spirea can handle full sun, but the foliage color is nicest with some shade. It prefers rich soil and needs regular summer water. Staying under 4 feet tall, it is a worthy addition to any landscape. 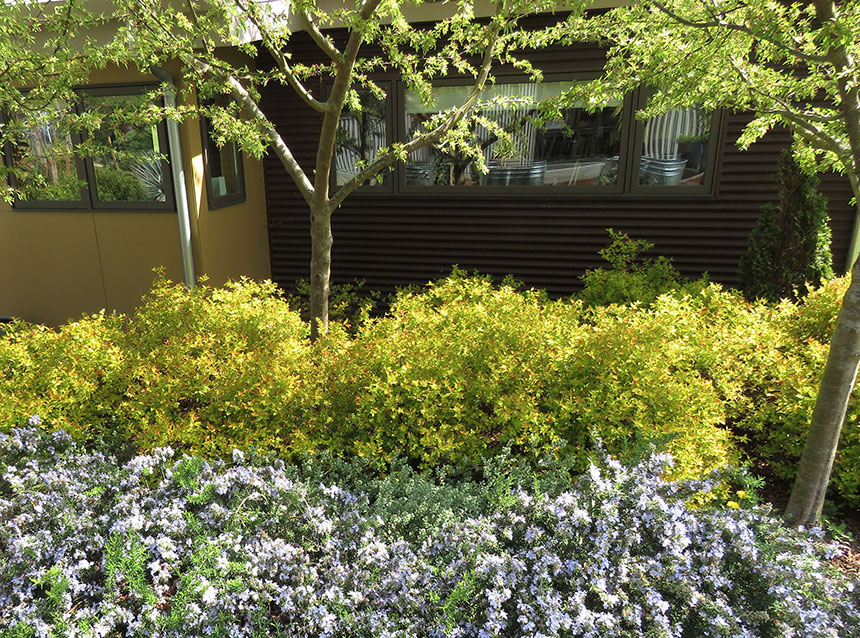 The many varieties of Japanese barberry (Berberis thunbergii) vary greatly in size, form, and foliage color, but they are all deciduous and all have thorny spines on their branches that cause some gardeners to shun them. If you can get past the spines, however, you will find they make great landscape plants, mostly because of their captivating foliage. Berberis thunbergii 'Golden Ruby' is among the tiniest of the Japanese barberries, reaching only about 2 feet tall.

Prized primarily for its coral red foliage that develops a golden edge at maturity, the dainty pale yellow flowers that emerge in mid spring are a sweet but subtle touch, while the crimson berries that dot the branches in fall are more showy. The autumn foliage is a blend of bright orange and brick red. Japanese barberry needs well-drained soil and prefers full sun to part shade. They are not drought tolerant, so some water should be provided during dry periods in summer. 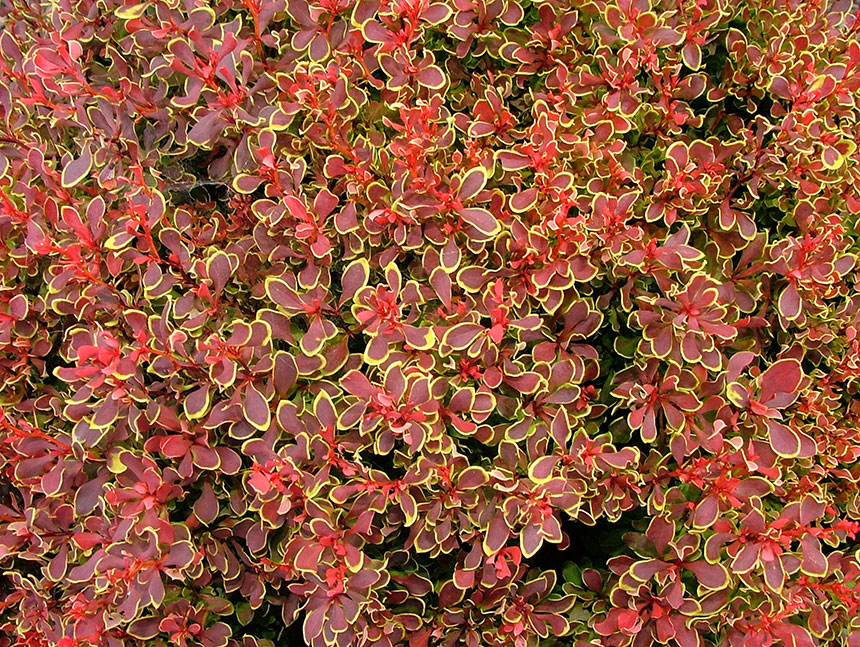 The wet winters and dry summers of western Washington are not ideal conditions for growing roses, especially the many hybridized varieties developed primarily for large, showy flowers. There are exceptions, however, and among them is Rosa 'Flower Carpet Amber'. A fast-growing small shrub to 2.5 feet tall by 3 feet wide, give these charmers a bright, sunny location and you will be rewarded with six months or longer of fragrant flowers, from late spring into fall. Early on, they will need regular watering during summer drought but will become increasingly tolerant of dry conditions over time.

Developed for resistance to common rose diseases such as black spot and mildew, Flower Carpet Amber is one of the few disease-resistant roses that have retained some fragrance. Its foliage remains glossy green all season, and the sweetly scented flowers offer tones of rose, peach, amber, yellow, and pink over their long season of bloom. 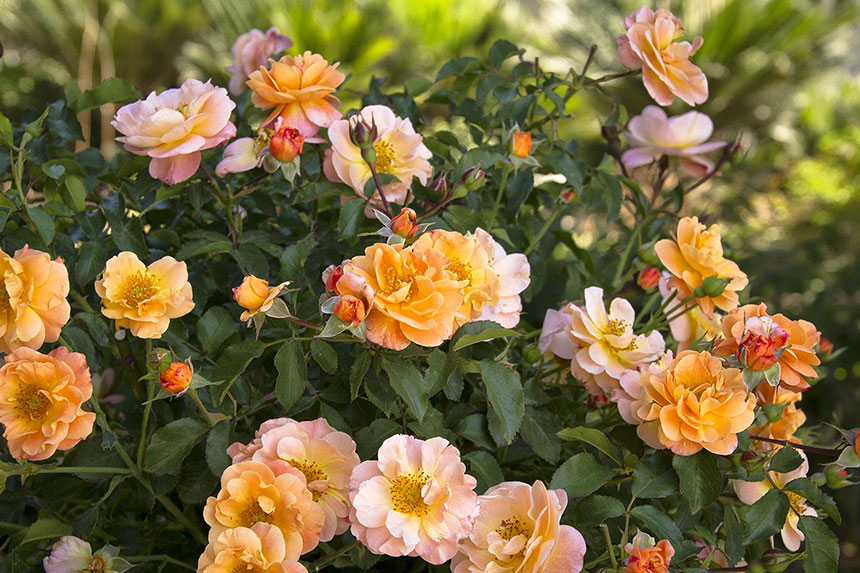 The hardy fuchsia, Fuchsia magellanica var gracilis 'Aurea', can test one's patience. Throughout winter, the arching bare stems seem hopelessly unpromising. Despite being painstakingly slow to leaf out and flower, however, it is worth the wait because the flowers and chartreuse foliage of this diminutive fuchsia remain long into the fall season. To 3 by 3 feet, tuck it into a semi-shady corner and enjoy watching hummingbirds gather nectar from its irresistible flowers. 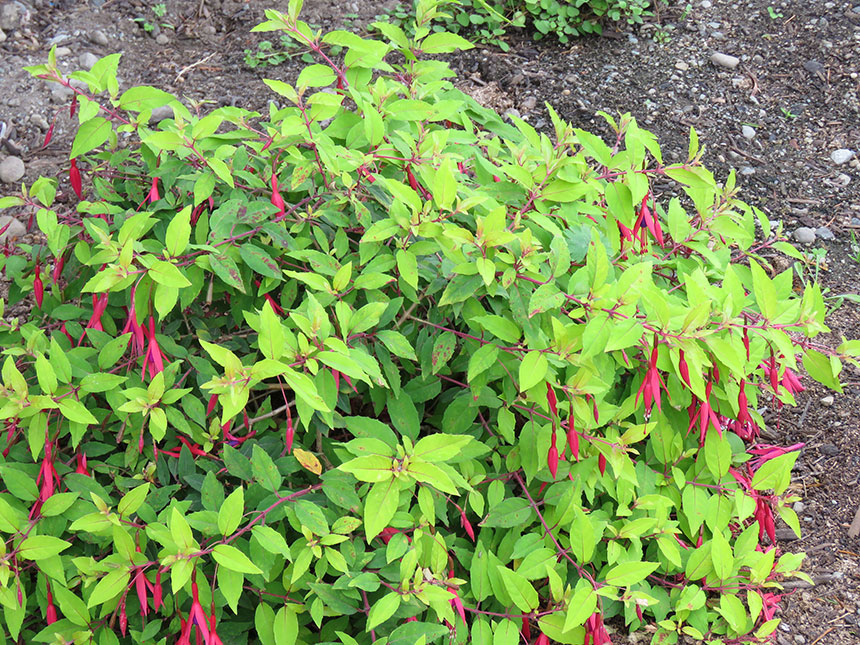 Another small shrub that helps beat the summer doldrums is the bluebeard Caryopteris x clandonensis 'Dark Knight'. With its soft glaucous green foliage and lavender-purple flowers alive with butterflies and bees, this airy shrub, which reaches 4 by 4 feet, looks best if pruned to just a few feet in late winter. Bluebeard needs full sun, well-drained soil, and only occasional summer water. Constant wetness around its roots during winter can kill it. 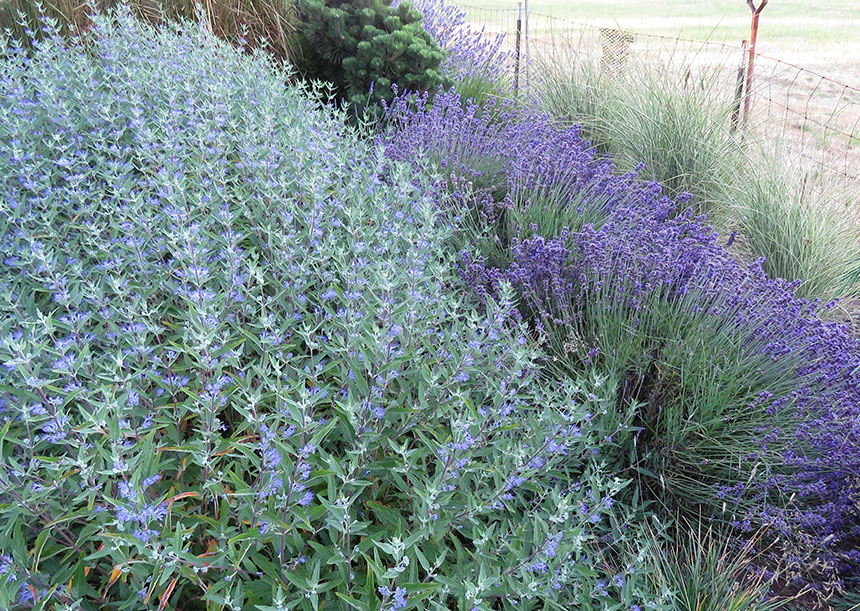 The bluebeard Caryopteris x clandonensis 'Dark Knight' in full flower in July. Beside it is the lavender 'Grosso'. Photo courtesy of Janine Anderson

Trying to control the size of a shrub often has a regrettable outcome. The integrity of the plant's natural form can be ruined, and the growth becomes ever more erratic as new stems shoot out in every conceivable direction. A better approach is to select shrubs that suit the scale of your landscape and that require minimal maintenance.

Garden design is complicated, and plants can be unpredictable, at least while they are alive. They might grow larger or faster than expected, or they may thrive in one site but struggle in another. Gardens will always need fine-tuning and editing. That is part of the frustration but also part of the challenge and art of being a gardener.

If in doubt, contact a landscape designer for assistance in selecting shrubs that you will enjoy and that suit your site.