Does your garden have the winter blues? Are you pining for signs of spring, sifting the soil looking for emerging shoots, inspecting naked stems for leaf and flower buds, feeling like you can’t stand another day of gray? It doesn’t have to be that way!

Incorporating evergreen conifers into your landscape can spice up your winter palette and add year-round interest as well. It is not an understatement to say that evergreen conifers come in every conceivable size and shape, have widely varying textures, and sport an amazing array of color tones.

This article recommends some of the best conifers for the smaller urban garden. Some are tall but stay very narrow, while others might be wide but remain under three feet tall; still others are amenable to shaping or have forms that are easy to work other plants around. Unless otherwise noted, most of the recommended varieties perform best in sun or light shade and prefer moist, well-drained soil. Some are drought tolerant once established; others will need supplemental irrigation, especially during periods of summer drought.

Although there are over 600 species of conifers worldwide, none of these are included in this article because most species are large trees and are not appropriate for smaller gardens. Instead, this article recommends some of the best cultivated varieties of a few of these species that are suitable for smaller residential gardens. Keep in mind that these are estimated sizes at 10 years of age, and some plants may continue to grow larger over time.

The Tall and Narrows
Tall conifers that stay narrow are easy to incorporate into almost any garden. Literally, the sky’s the limit! Yews are particularly useful because they are among the few conifers that can be sheared and then resprout from the cut wood, eliminating unsightly areas devoid of foliage. Two of the best yews for the smaller garden are Taxus baccata ‘Standishii’, a gold-needled variety that stays under two feet wide, and the dark green column of Taxus x media ‘Beanpole’, which reaches ten feet tall but seldom exceeds one foot wide. 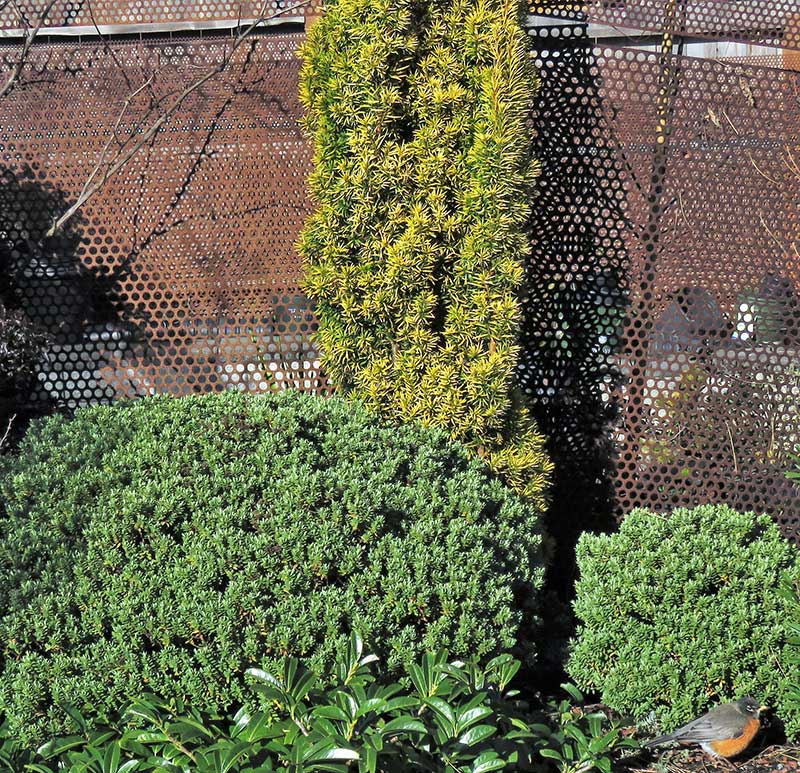 Numerous ornamental conifers are from species in the genus Chamaecyparis, which is a member of the Cypress family. Plants in the Cypress family usually have flat, scale-like foliage, such as is found on Western red-cedar (Thuja plicata), a Northwest native. Many ornamental varieties have come from Lawson cypress (Chamaecyparis lawsoniana), a tree native to Oregon. Among these are Chamaecyparis lawsoniana 'Blue Surprise', a blue-foliaged form, and the golden Chamaecyparis lawsoniana ‘Golden Surprise’. Both of these grow into columns of about six by two feet. Unlike the scale-like foliage of most members of the Cypress family, however, these two sport what is called juvenile foliage, which appears soft but is actually quite prickly to the touch. Because Lawson cypress is prone to a devastating disease organism (Phytophthora lateralis), nursery plants should be grafted onto disease-resistant rootstock. 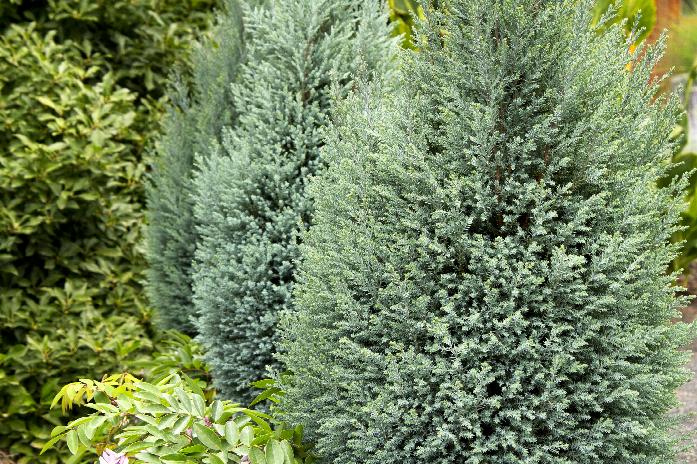 Two varieties of a Japanese species, Chamaecyparis obtusa ‘Spiralis’ and Chamaecyparis obtusa ‘Thowell’, have delightfully twisted forms, with fine-textured sprays of foliage that spiral around the branches. Both maintain manageable sizes of about six feet tall by two feet wide. Either of these narrow selections will contribute a striking architectural quality to your garden. To the right in the foreground is the sculptural, dark green form of Chamaecyparis obtusa ‘Spiralis’; in the distance is the tall weeping bluish column of Sequoiadendron giganteum ‘Pendulum’. Photo © Doreen Wynja

Very narrow varieties of Alaska cedar, Callitropsis (Cupressus) nootkatensis, a coastal native, includeCallitropsis nootkatensis ‘Green Arrow’ and C. nootkatensis ‘Van den Akker’. These weeping forms can reach 30 feet tall over time while maintaining their slender figures. If a side-growing branch emerges from the trunk it can be easily pruned out if crowding is a concern. 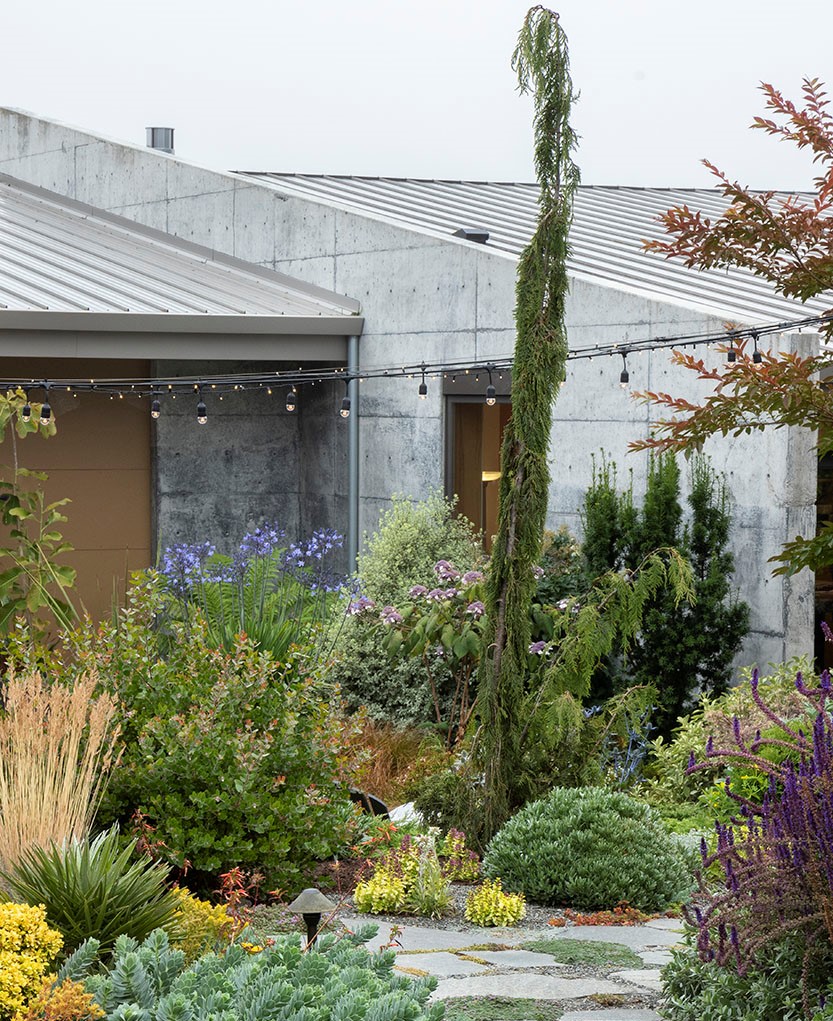 Growing even taller than the narrow forms of Alaska cedar but staying very svelte is the gravity-defying weeper Sequoiadendron giganteum ‘Pendulum’ (shown above with Chamaecyparis obtusa ‘Spiralis’). Some find this easy, deer-resistant, blue-toned variety grotesque, while others are intrigued by it. In either case, it is impossible to ignore! 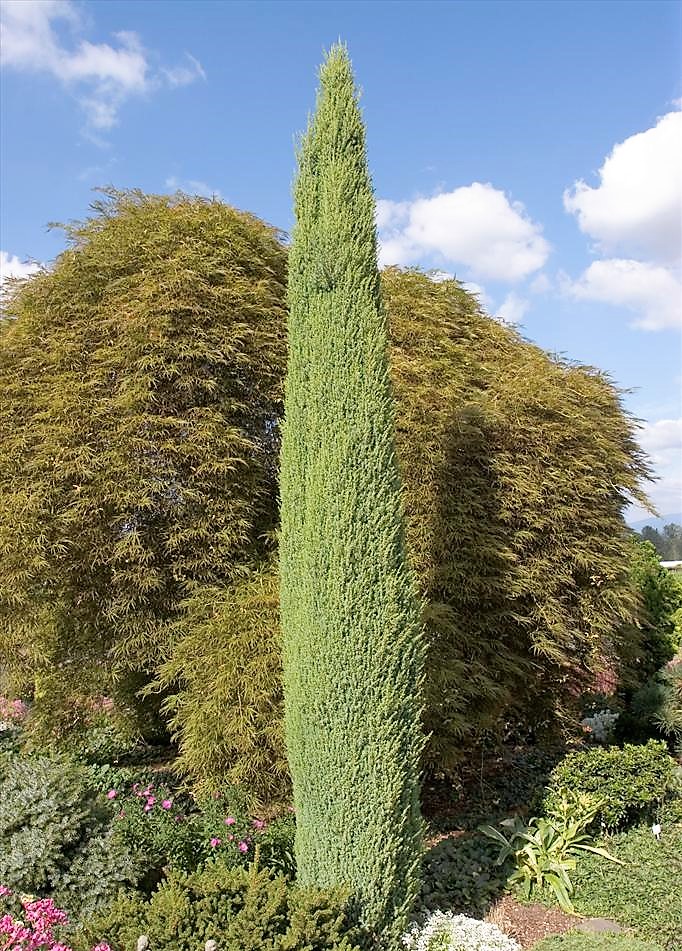 Tiny Treasures
Some small conifers form such perfectly rounded mounds, you might think they would be deadly dull. Quite the contrary, however. They can be fascinating, despite their tidy, diminutive forms. Cryptomeria japonica ‘Little Diamond’ is related to a giant timber tree in Japan, but Little Diamond reaches only two feet tall by three feet wide. Its awl-like leaves are arranged spirally around its branchlets, creating bright green corkscrew-like ringlets. 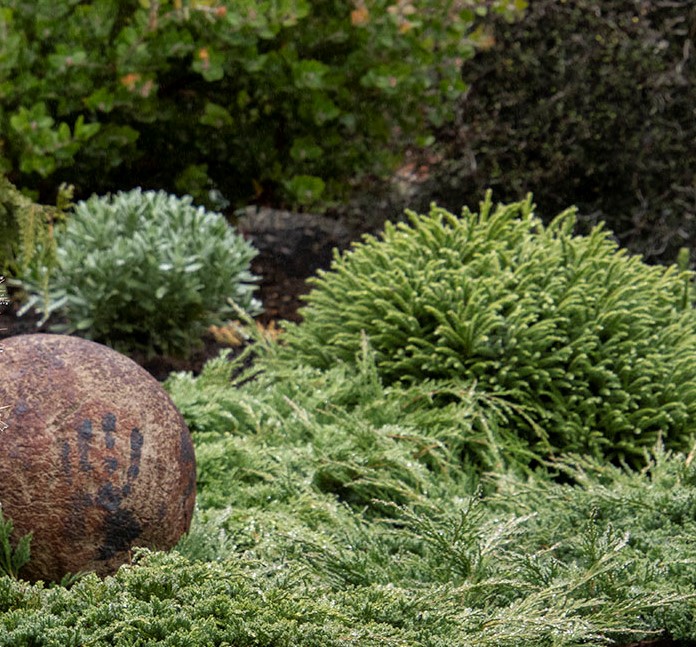 A related variety with a very different look is Cryptomeria japonica ‘Tansu’. Tansu has an irregular growth habit and reaches a size of about three by three feet. This slow-growing cultivar has a coarse texture and light green, pointed needles that exhibit bronzy tones in winter. 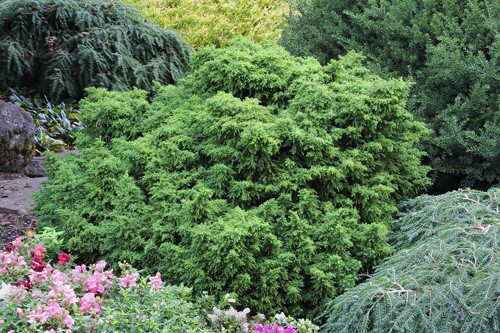 A variety of Korean fir, Abies koreana ‘Cis’, has bright green needles that radiate out from the stem and produce small brown buds at the branch tips. Reaching about two feet wide and a little shorter, this slow-growing sphere has a flattened rather than rounded top. 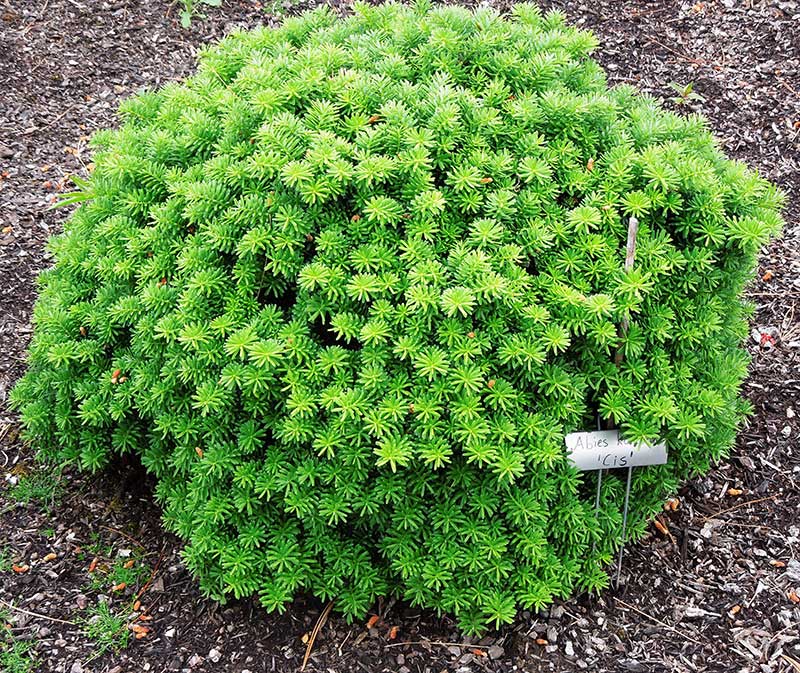 Another fir, Abies pinsapo ‘Horstmann’, is slightly larger at two feet tall by three feet wide. A cultivated variety of Spanish fir, it’s nearly impossible to resist squeezing its branches, whose texture resembles the stiff plastic bristles of a round hairstyling brush. Its short, blue-green needles are rigid but not prickly. In early spring, the tips of the branches are laden with beautiful violet-red pollen cones. 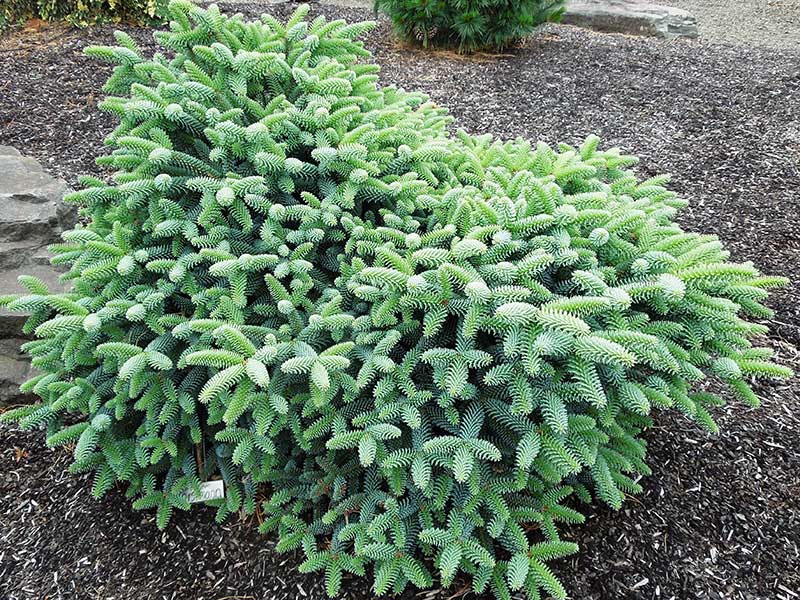 Podocarpus lawrencei ‘Blue Gem’, a Mountain plum-pine native to Tasmania, is an extremely versatile conifer. Although it reputedly reaches four feet tall and eight feet wide, it is usually shorter, and similar to yews, it can be sheared or cut back to fit its intended location and size in your landscape. 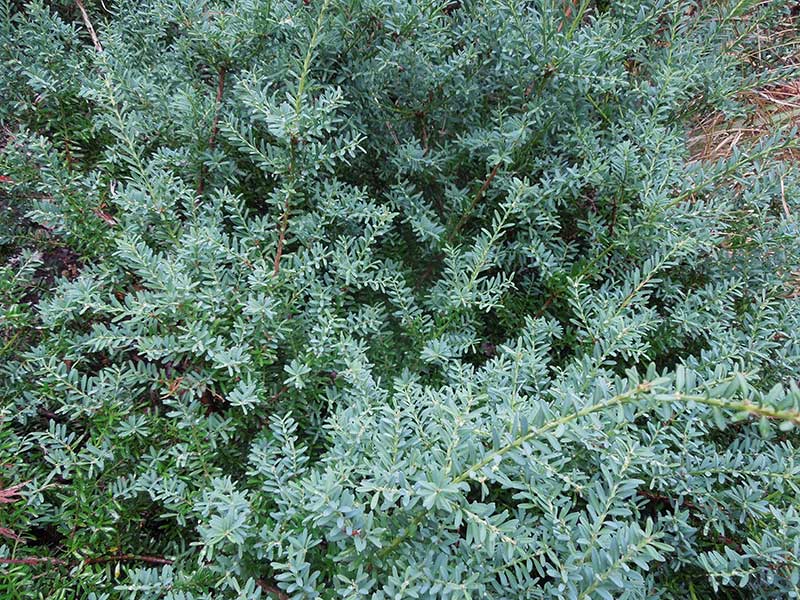 A contrast in texture and form is provided by Siberian cypress (Microbiota decussata), whose sprays of lacy, scale-like foliage radiate out from its center. Siberian cypress can cover a lot the ground, reaching eight feet in diameter while staying below two feet tall.

Two low-growing junipers are wonderful garden additions providing they are sited in full sun in well-drained or dry soil. Juniperus conferta ‘Blue Pacific’, a blue-tinted variety of shore juniper native to Japan, where it is found on sand dunes, thrives in coastal conditions but is also extremely heat tolerant, making it useful for edging walkways and driveways.

The blue-green carpet of slow-growing dwarf Japanese garden juniper, Juniperus procumbens ‘Nana’, will form a dense mat of ground-hugging branches and spread to five feet wide while staying below 12 inches high. It is especially effective grouped en masse on a rocky slope. Pruning can ruin the forms of both junipers and result in unattractive cut branches from which new foliage will not emerge. 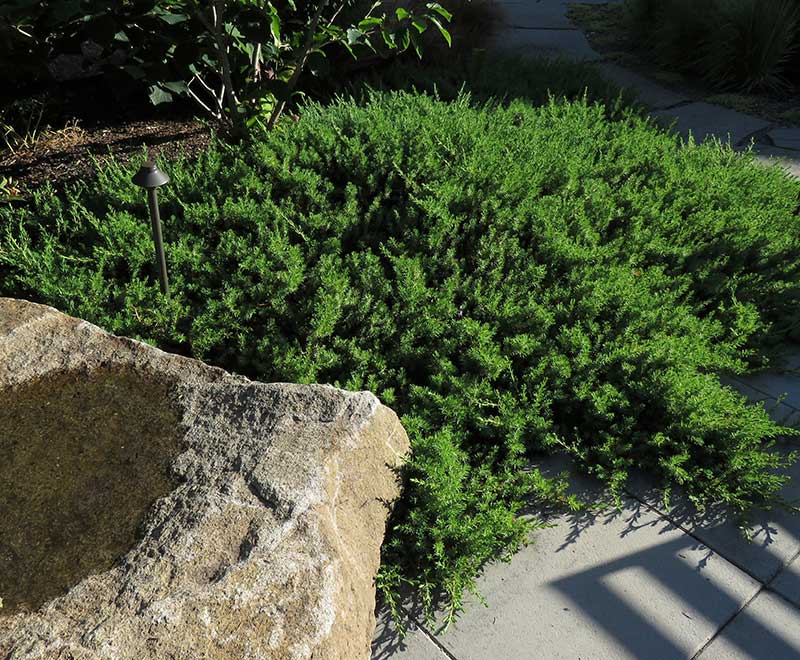 The branches of slow- and low-growing Juniperus procumbens ‘Nana’ radiate from the center in every direction. Photo courtesy of Janine Anderson

The Possibilities Are Almost Endless!
As mouth-watering as the splendid conifers showcased in this article might be, they are a small subset of the scores of conifers that can fit handsomely into a small garden area. Landscape designers have tested many conifers while searching for those that are tried and true. I am grateful to designers Kryssie Maybay, Shannon Grina, and Susan Picquelle (retired) for their help and suggestions. More talented area designers can be found here.

"Last year I started my landscape design business in the Seattle area and joined the APLD as an emerging professional. Looking back, I don’t think I could have found my feet so quickly without the help of the APLD. The organization has been so helpful providing information, training, best-practice advice, but to me the real value lies in the personal exchanges with fellow members during our meet-ups. "
Heidi Walther
Heidi Walther Garden Design